One of the prettiest seashore plants and a useful one for the forager as it tastes great! Aster comes from the greek meaning Star referring to it's flower, as a result it has also been called Starwort.. 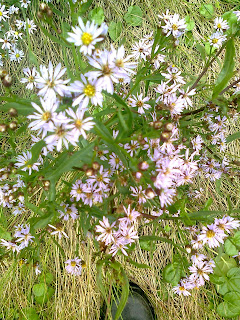 ﻿A beautiful shade of purple, it really lights up the shore line almost reminescent of a hippy daisy.
This plant along with samphire is actually classed as a sea vegetable and has a pleasant light flavour and not at all over powering like some wild greens can be. 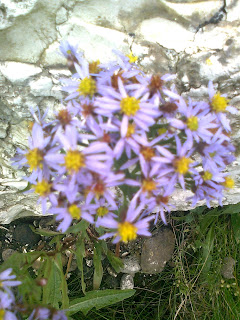 Folklore.. Gerard said that this plant changed the colour of it's petals "thrice a day"
In ancient Greece the leaves were burnt to ward off serpents and evil spirits while Pliny the elder said a tea of aster cured snake bites while wearing a sea aster amulet prevented sciatica. The plant was supposed to have appeared on earth after Virgo looked down and shed tears each one falling to the earth and turing into the sea aster flower.. Virgil wrote an ode to the plant
There is a useful flower
Growing in the meadows, which the country folk
Call star-wort, not a blossom hard to find,
For its large cluster lifts itself in air
Out of one root; its central orb is gold
But it wears petals in a numerous ring
Of glossy purplish blue; ’tis often laid
In twisted garlands at some holy shrine.
Bitter its taste; the shepherds gather it
In valley-pastures where the winding streams
Of Mella flow. The roots of this, steeped well,
In hot, high-flavored wine, thou may’st set down
At the hive door in baskets heaping full.
Posted by Buzzard at 08:30