Just came back from the inaugural meeting of the recently formed Northern Ireland Bushcraft Club. This gathering was held in the beautiful county of Donegal, over looking the wonderful wild Atlantic way 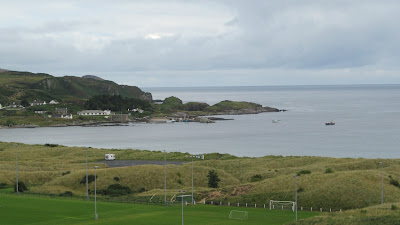 It was situated in a lovely wood that had a little of everything, and provided great inspiration for exploring. 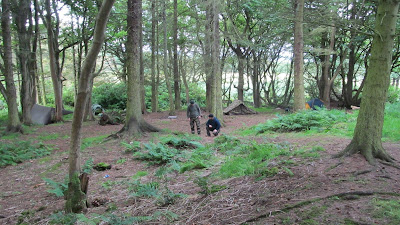 various set up's were allover the woods from tents, bivvi's, hammock and tarps and even a natural willow bender that I spent a very comfortable weekend in! 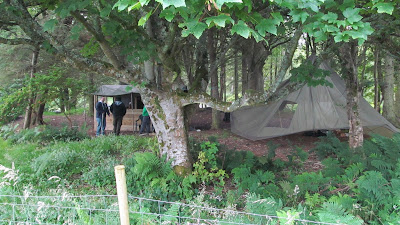 The parachute provided a great communal area for chats and discussions, but the best area was the "cookhouse" where Davy spent most of the time cooking and supplying all us hungry backwoodsmen (and women) with food, we certainly didn't go hungry. 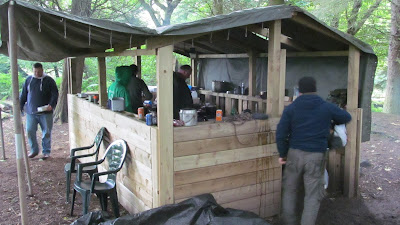 Not so much bushcrafting as an entire base camp set up that could have catered for all the woodsmen on the island, it was simply magnificent. 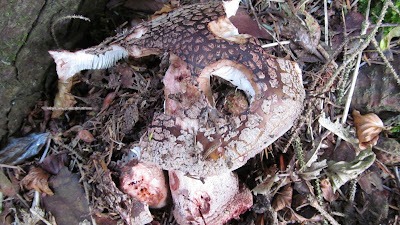 A few activities were organised including fungal forays for Amanita's like the Blusher above, so called because it's flesh bruises pink when crushed as you maybe able to just make out in the above pic.. 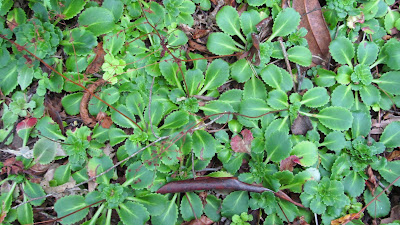 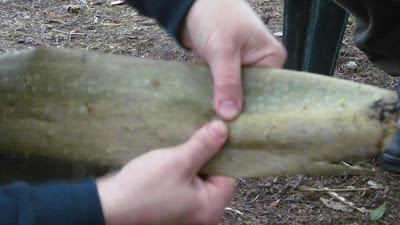 also willow work were we made baskets from bark and created simple working tools, also for those just starting out we practiced some primitive fire skills.

The ethos for this club is to encourage and promote Bushcraft, Survival and Backwoodsmanship where ever we can, to offer a skill sharing service where you simply request some help and someone in the group assists in that particular skill. It aims to be an all encompassing club where groups, associations or individual members can all be part of something bigger and better and create a bushcraft network of like-minded individuals. This is all in a free and friendly environment were all we ask is that you respect Nature, Wild Places and each other and we welcome everyone regardless of age or ability. Meets will be held regularly and Full gatherings twice a year. So if you feel like you'd like to come along and see what it's all about, to try out something new, practice skills, or just make some good friends then we would encourage you to get in contact through the Northern Ireland Bushcraft Club ( NIBC) facebook page or email me here and I'll pass your details on.
Posted by Buzzard at 12:54 2 comments: 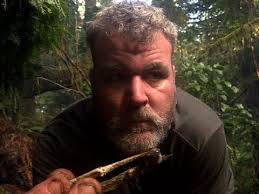 For some reason it seems that true introspection comes most clearly to those who slip back into nature and allow the natural rhythm of the earth to course through their spirit and it did that with Alan, I could listen to his philosophies for ages and I hope it's not the last we see of him.. congratulations brother, you have won my admiration and I do not give that out lightly.
Discovery Channel... give him his own series !!!!
( and to Sam, man you are a true woodsman and human being, well done and I salute you.)
Posted by Buzzard at 15:34 2 comments:

I had a couple of pieces of power hacksaw blades left from a project I was doing so I thought I'd put them to use. They are both around six inches long and just over a millimeter thick ( nice mix of imperial and metric there !!) 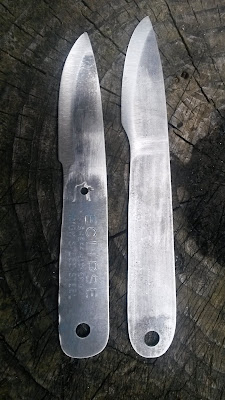 took a lot of work to get them to this stage, the steel is unbelievably hard and I had to use a stone grinder to work these while keeping them cool at all times.. 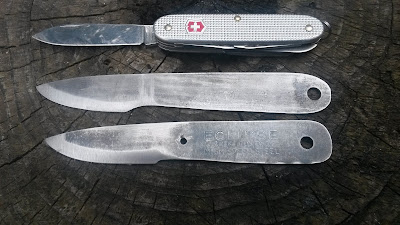 and with a SAK alox farmer for scale, not sure if I'll leave them like this or do a paracord wrap or wooden handle...maybe one of each!

Another one of the crucifers that is easily confused with the ones I've posted about before. A very common agricultural plant that is now often found naturalised in roadsides, hedgerows and field edges, commonly cultivated for the oil from it's seeds it is actually an edible too. 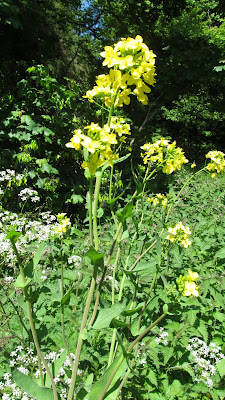 this plant was found growing on a verge at the side of a wood, a tall plant nearly 3 feet tall and very attractive actually. 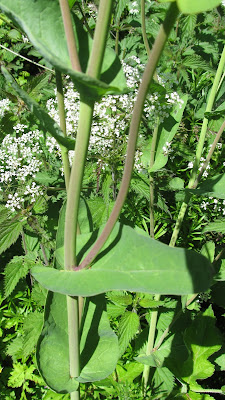 the leaves also clasp the stem as do those on brassica rapa, but notice the colouration of the rapeseed plant, how distinctively blue grey green it is, much more so than wild turnip, it almost has that mealy appearance. 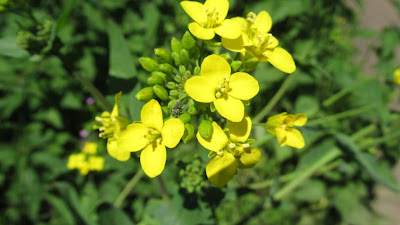 also notice that generally (though not always, it depends on the subspecies) as a deciding factor in identification  the flowers are higher than the buds, whereas in wild turnip it's the reverse.
Though I have often been told that all crucifers without exception are edible I find this difficult to believe as research into certain brassicas tends to say otherwise (with certain parts of the plant anyway) and the above plant is an example of this.
The seed contains a substance called Erucic
acid and there have been a number of reports of animals being poisoned after eating this plant. At one point in time oilseed rape contained 40% erucic acid and this would have had profound detrimental health impacts on those who consumed it, with modern intervention and genetic modification it now contains less than 2% erucic acid.
Although the glucosinolates in the seed (those substances that can have toxicological effects) have been reduced significantly the same can't always be said for the compounds in the foliage.
Though classed as edible, can you be sure that the plant you're eating is the correct cultivar? There are a tremendous amount of subspecies of this plant all with differing properties and all classed as edible, but do be wary, like many things in our wild larder any toxicity involved will tend to be cumulative, so eat sparingly and you shouldn't have a problem, the young leaves and the flower buds are the best, personally I give the seed a miss after all it is used for biodiesel and was once one of the finest machine oils available!
Posted by Buzzard at 03:27 2 comments:

Another member of the brassica family from which so many of our familiar vegetables derive, things like broccoli, kale, turnips and swedes even things like bok choi. 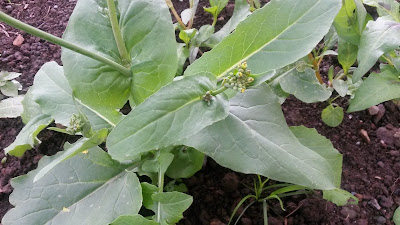 younger leaves clasp round the stem as can be seen here, and they have a bluey green colouration but it's not as distinct as that of Brassica napus ( oilseed rape) and is not as emerald green as that of charlock. 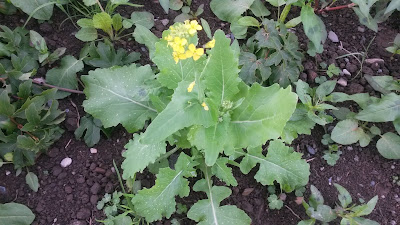 as the plant grows it produces the standard yellow crucifer type flowers, and the ID can be difficult between the various species, subspecies and cultivars of Brassica rapa, though there are a few tips to look out for.. 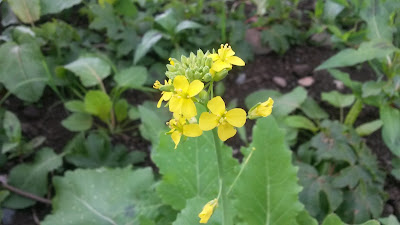 The bluey green colour is one give away but so is the fact that the buds often grow slightly higher than the flowers!!! though obviously you'll need to see the plant in flower to use this trick, but the last hint is one of the best.... 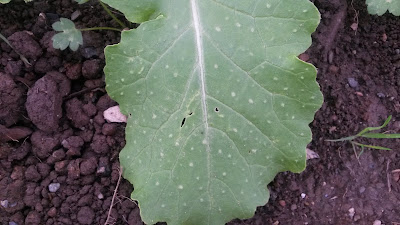 .. if you check the basal leaves and it has lots of little raised warts or spots then that's generally a dead give away for wild turnip.
Although due to the fact that there are so many subspecies of this genus I realise identification can be difficult and using just one of the tips above can give you a good idea of what you've found though you might still not be 100% sure as the tips are not always fool proof, however find a plant that fulfils all the criteria above and you've found Wild Turnip.

Davy and I have just finished doing a little filming for a programme due to be aired next spring on BBC2,
It was good fun if a little staged, still it's always nice to give something back and see people enjoying themselves out in the woods.. 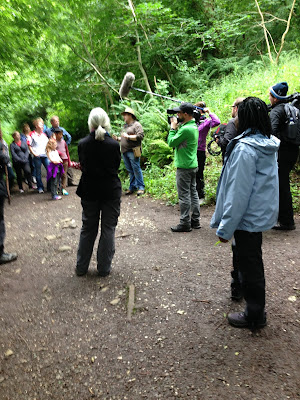 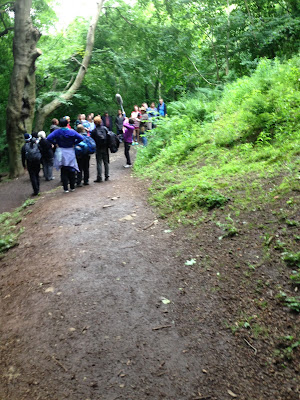