The End of an Era

We visited a little site we haven't visited in many many moons as we were led to believe a road was being built through it.. 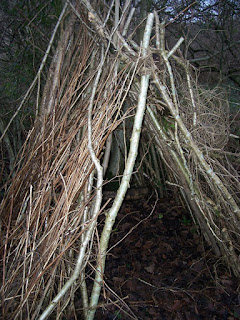 someone had attempted to build a shelter, I say attempted as you can see why!!
The ground was well walked over, there was some litter and a lot of the hazel had been cut back 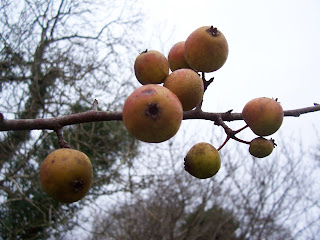 there were still some crab apples on the trees, a nice find for this time of year 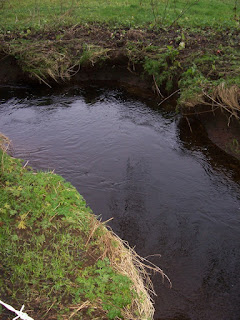 It always had a good source of water but when the road is built I fear for it's purity.. 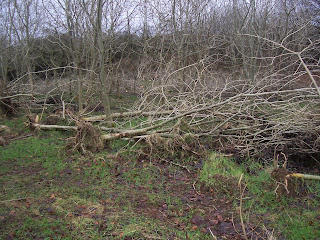 the young ash plantation had all been cut down 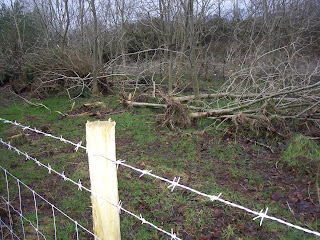 and the ground had all been fenced off for a considerable distance, such a pity because at one time this little place had such potential now it seems to have lost a lot of it's magic, somehow I don't think we will ever be back.
Posted by Buzzard at 06:14 2 comments: 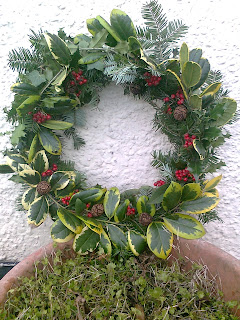 Davy and I would like to wish all true blood Bushcrafters a very Merry Bushmas and a Preppy New Year!!
We hope this coming year brings new knowledge and adventures
Keep the Faith﻿
Posted by Buzzard at 09:38 No comments:

Most Bushcrafters are aware of the edible properties of Burdock root, when you mention a drink some even say "Ah, Dandelion and Burdock", but burdock root tea is a superb beverage with great benefits. Called Gobo in Japan it is highly esteemed and greatly sought after for it's flavour and health benefits, it's also easy to prepare.. 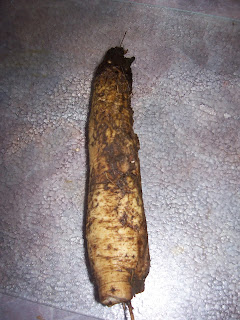 dig up a decent size burdock root, this is the perfect time of year to find them! 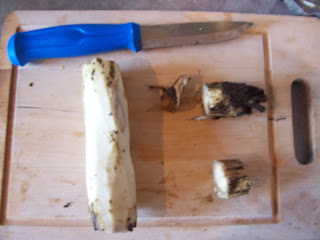 trim and skin the root as necessary 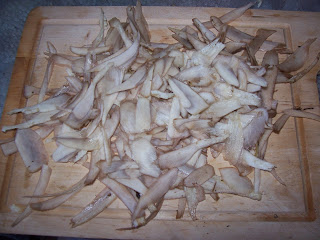 carefully shred it into thin slivers 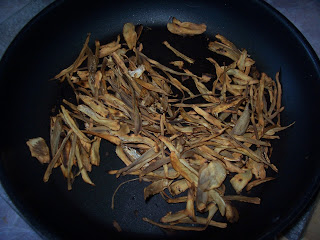 then dry roast it in an open pan 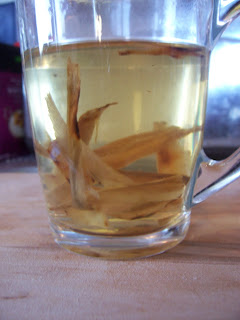 infuse a few slivers in some boiling water,then remove for a gorgeous tasting tea 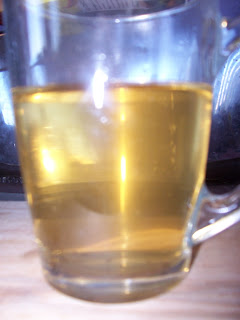 It has a wonderful sweet aroma, my son thought I was making potato bread when he smelt it, it's  flavour is very sweet and potatoey and is really warming and comforting, it really is a bit special..
Burdock root was believed to be a detoxifier and it may be applied externally as well as internally to relieve eczema and psoriasis also it may ease painful joints and act as a diuretic. Ancient Chinese medicine combined burdock root with other herbs to treat colds, measles, sore throats, and tonsillits and the Japanese consume burdock root as a vegetable also.
It is reputed to be great for PMS and to lower blood sugar. It also has antibacterial and antifungal properties.
Posted by Buzzard at 11:28 2 comments:

It's a common misconception that you can only gather wild garlic in the spring and summer, if you can remember where the garlic beds are it's easy to get yourself a snack..here are some I dug up last week 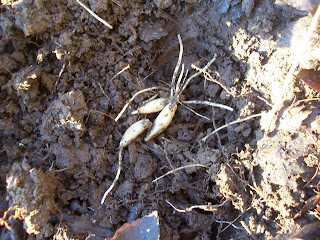 They're easy to dig up but remember that you are destroying the plant if you take the root so only harvest if necessary, remember it's health benefits too, it's got good antibacterial properties as well as being a good antifungal and it also helps fight colds and flus so perfect for this time of year.
Posted by Buzzard at 13:05 No comments:

It's always nice to get out and especially at this time of year when it's frosty and cold, the woods seem to be asleep but look closely and you'll find some signs.. 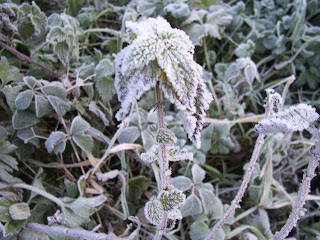 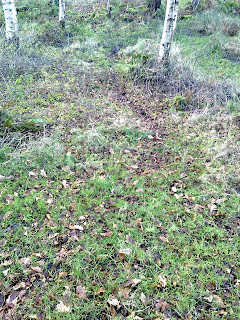 game trails were evident if you pay attention, the fallow were obviously moving well 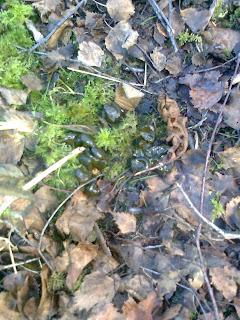 and they left fresh evidence behind!! 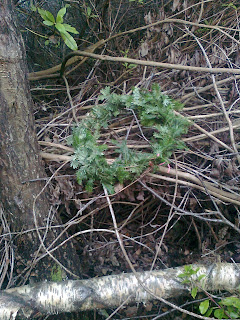 and Davy started his christmas wreath in honour of the Greenman, days out like this certainly put us in form for christmas!
Posted by Buzzard at 08:37 No comments: 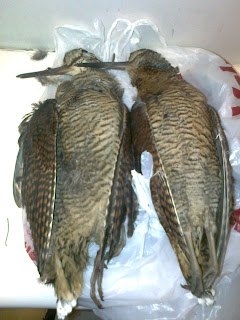 Managed to acquire a nice brace of woodcock recently, so with Davy's game larder and these birds we will have a great selection to try from over the winter to come.﻿
Posted by Buzzard at 05:53 No comments:

I was in the local £ shop recently and saw something that should appeal to all us Bushcrafters as well as Preppers and Outdoors men in general.. 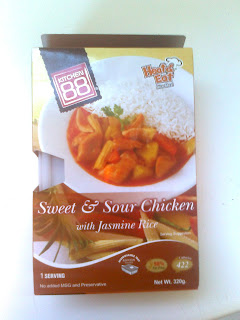 Doesn't look like much at first sight, but open it up and lets take a look inside!! 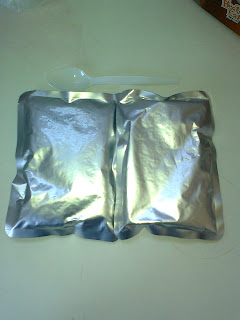 ﻿
Look familiar ?? It actually contains 2 ration packs, one of rice and one of sweet and sour chicken, also a plastic spoon and a plastic bowl. They are microwaveable but more importantly also boil in the bag just like traditional ration packs. They are dated for use by 2015 but as most of us know, when ration packs are sealed in mylar like this they can last for years and years, but what about the taste? 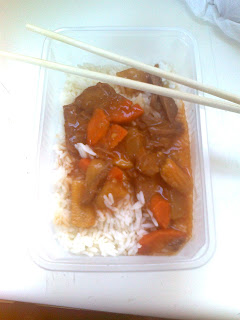 Well, when opened they smelt like dog food!, also looked a little like it too especially as the meat was very dark and more like beef than chicken!! Taste however was quite good, nice flavour and decent portions, certainly not a kings dinner, but a very good fall back for bushcrafters and preppers and at £1 in price an incredibly cheap alternative to ration packs that can be nearly 5 times that price!
I think I'll stock up on a few more.
Posted by Buzzard at 10:06 No comments:

I'm concerned about the disease affecting Ash trees in the UK at the minute, as any good bushcrafter knows the Ash is one of our most splendid and important trees and to loose them would do irreparable damage to our natural heritage, we should all know just how important these trees are to us..even the folklore connected with them is outstanding, remember the Yggdrasil ??? 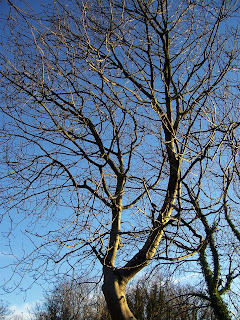 ash trees are very common in my neck of the woods so just in case the worst scenario happens.. 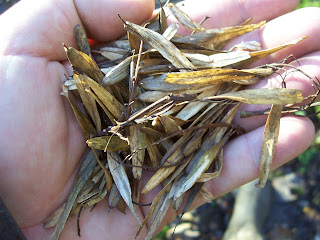 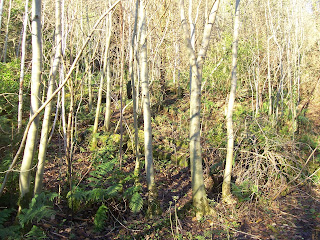 as conservationists we want to see little ash plantations like this for many years to come.
﻿
Posted by Buzzard at 13:01 2 comments:

More Fun at the Forge

Thought y'all might like to see some more items we made at the forge just recently, if I say so myself I do think we are starting to get an idea of just how to do this blacksmithing thing 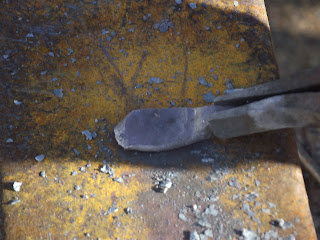 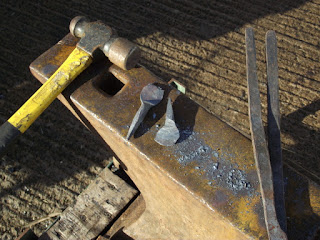 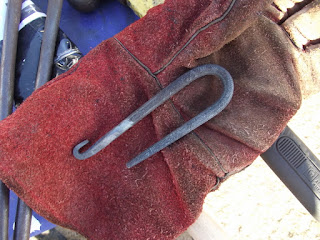 and one thing I've always wanted to make was my own steel (strike-a-light) for use with a flint, I saw Tony's one that he had forged himself when we were down with the IBC over the summer and it just fed the fuel of my desire all the more. This is the first one I made out of a simple round file, the shape is not that important but getting it to spark correctly most certainly is, and once I had the steel shaped it was heated to non-magnetic and water quenched, it sparked perfectly!! I was so pleased I decided to try something a little more elaborate 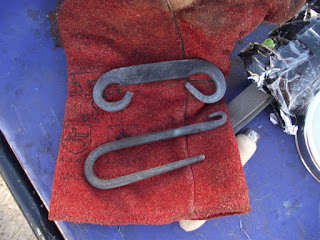 and here it is, a simple Ram's Horn steel, not by any means a work of art but it fits my fingers well and sparks very well indeed..I am a happy man!
Posted by Buzzard at 07:15 2 comments: