Look what I found, Personal Nostalgia

I was clearing out the shed, old boxes and bags that I hadn't used in years and look what I found. 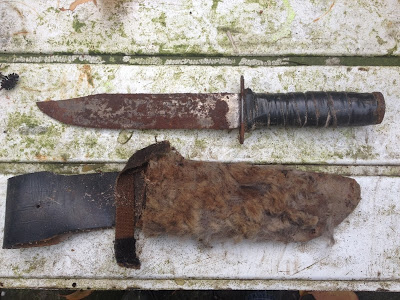 now it may not look like much to you guys, but this was my first ever 'Bushcraft knife'.
I bought it when I was 14 so that's many, many years ago!!
It was an old Ka Bar copy and I used it for everything. I totally loved this knife!
You couldn't get it razor sharp and it didn't hold an edge well, but it was mine!
Even more special was the sheath which after 25 years still has the skin of the first rabbit I ever snared and tanned on it.. the fur is coming off it easily now, but nonetheless this gives me incredibly fond memories of my youth.
﻿
Posted by Buzzard at 06:40 3 comments:

A very merry Christmas to all our Buzzard Bushcraft readers, we sincerely hope you have a very happy and healthy Christmas and new year, and we wish you all good fortune for you and your family.. 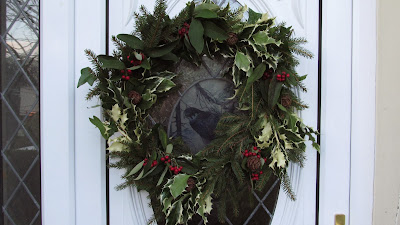 
After you have fired a shot at a deer, it has fallen to the ground and you have confirmed that it is dead, you now need to process it’s carcass ready for it to enter the human food chain. 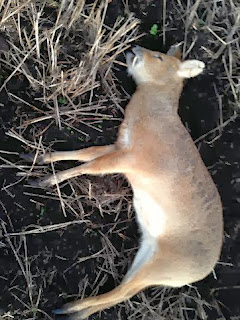 A simple way to check that the targeted animal is dead is to touch it’s eye with a stick or finger, it’s not advisable to do this with the barrel of your rifle, if you do make sure that it is unloaded. 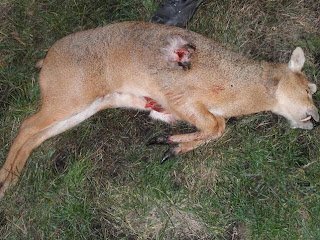 This picture shows the extent of the damage caused by the round exiting the animals body.
To ensure that the meat does not become contaminated by the contents of the animals ‘rumen’ (that is the system of four chambers which makes up the bulkiest part of a deer’s digestive system)  it must be gralloched (this is a traditional term applied only to deer which describes the process of removing the digestive tract of a deer) within an hour. This is a legal requirement if the meat is to be sold and is particularly important in the warm summer months and if the rumen has been damaged by the shot. 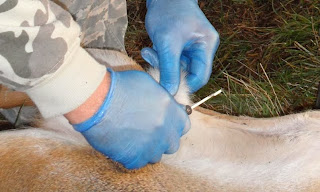 You should make the first cut as shown in this picture by lifting the skin of the belly and then cutting with the knife rather than by pushing the knife in, if you puncture the rumen with the knife the meat will quickly become contaminated. This first cut can be made anywhere between the bottom of the sternum and the rump but with a doe I normally remove the udder first giving an easy entry point for the rest of the gralloch. 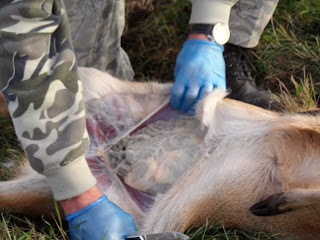 Once you have exposed the entire rumen, there is no need to continue to cut all the way up to allow access to the heart and lungs at this point, these can be removed later once the deer has been hung up, they will not contaminate the meat at all. You can now empty out the rumen onto the ground, remember it is attached to the oesophagus and the colon these will need to be severed to allow removal of the rumen but remember that pressure on the rumen once these have been severed will force faeces and/or stomach content out into the body cavity of the animal. To avoid this they can be removed entirely, in the case of the colon by cutting around the anus pulling it out and knotting the colon, the same can be done with the oesophagus by accessing it through the neck of the animal and again knotting it before the rumen is removed. When the rumen is removed the entire digestive tract will come with it.  If this is too fiddly to achieve in the field the colon and oesophagus can be knotted nearer where they join the rumen to avoid contamination and removed later when the animal is hung up 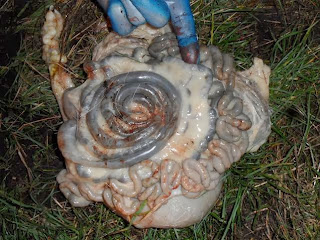 Here is the rumen once removed with the intestines attached and spread out to show their Cumberland sausage appearance. At this point you could check that the mesenteric lymph nodes appear healthy, they should appear as small grey lumps between the intestines, any sign that they are enlarged, swollen or filled with pus might indicate disease. 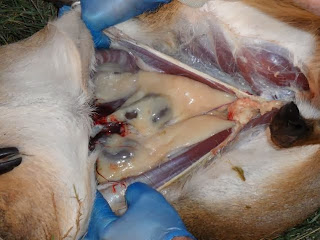 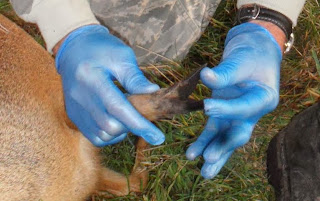 There are several other checks that can be carried out including, in a comprehensive check, checking other lymph glands such as the retropharyngeal located in the jaw an animal, bronchial located near the top of the lungs portal located near the liver etc other more obvious checks are illustrated above including signs on the hooves for foot and mouth and on the amount of fat carried internally around vital organs such as the kidneys.

These checks are intended to confirm that an animal is disease free and to identify the presence of any notifiable diseases in the UK deer population. Notifiable diseases include (but are not limited to) TB, foot and mouth and anthrax and must by law be immediately reported to the Divisionary Veterinary Manager at Animal Health (part of DEFRA).

Once the gralloch and any checks have been completed the gralloch should either be taken away with you or buried away from any footpaths or regular activity. If you are going to process the meat yourself for your own consumption it is much easier if you can hang the carcass up.

Once the animal is hung up it is much easier to work on and can be skinned, notice that the skin is being removed without a knife; it can be separated from the meat just with the force of the hands. Once it has been skinned and the head and feet have been removed the carcass can be butchered. With such a small deer the main cuts are going to be the haunches, shoulders and backstrap steaks as well as the tenderloins and other smaller offcuts and offal. 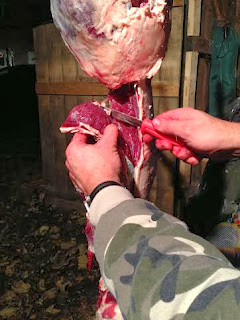 This picture shows the removal of one of the backstraps, one of the best bits of meat from the carcass. 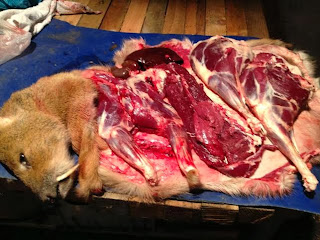 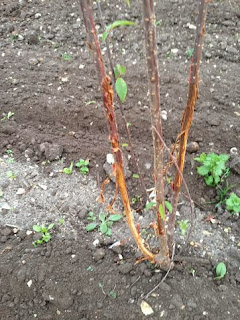 This picture shows why deer stalking is necessary, this is one tree of many affected in a similar way in a nursery of young trees. Populations of deer left unmanaged can cause massive damage.

I hope you have enjoyed this brief guide on how to deal with shot deer. All pictures were provided by Martin Guy.

Check out my blog on how bushcraft can be used to enhance education at http://bushcrafteducation.blogspot.co.uk/ or follow me on twitter @GdaGuy

Legal Note; This brief guide is not designed to give full training on how to inspect a deer carcass. Although you can use a carcass for your own consumption without official training, you must have appropriate training to carry out checks on the health of deer before you can sell it. For guidance on where to get this training refer to the Deer Initiative and/or British Deer Society websites.

Davy got this on ebay, it looks brilliant, seems to be made from tin and I would think probably from the early 1930's 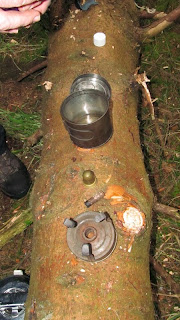 it's composed of a meths burner with stand, a tin cup with folding handles and a lid 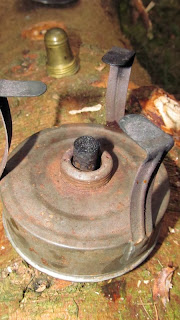 it's a brilliant wee set up and you can see where modern burners like the trangia etc got their ideas! 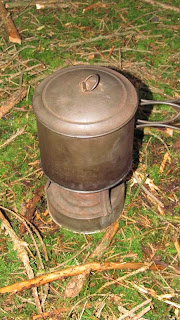 filled with meths it heated up a 1pint mug in about 6 mins, that's brilliant even by modern standards.
if anyone knows anything about this kit, please let us know, we think it's made by Tower.
Posted by Buzzard at 12:31 No comments:

Thought I'd do a very quick review of Mr Mears book, the review is below 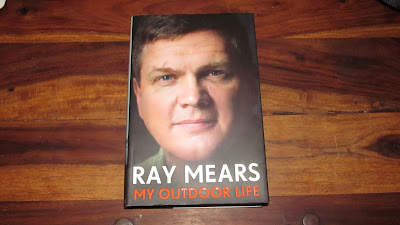 Another Food prep night with the Scouts

The Scouts have been asking for another food prep night for quite a long time, so we gave in to the requests and got some game, rabbits, pheasants and rainbow trout, food from the Land, Air and Water..very fitting 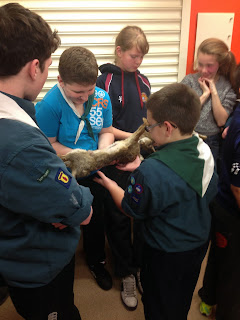 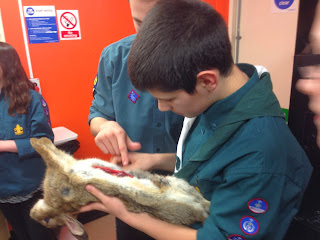 the idea behind this nights prep was to prepare the game without the use ofknives, so skinning the rabbit just with your hands, plucking and gutting the birds and ponassing the trout
﻿ 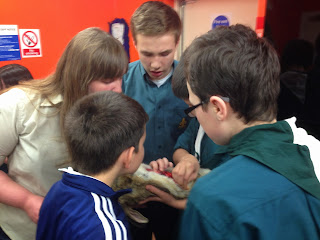 all very easily achieved and cooked up for a great wee evening supper, it all went down very well!!