Not really the sort of thing you would normally go for while its inhabited, but once the wasps have flown then nature provides us with something very useful 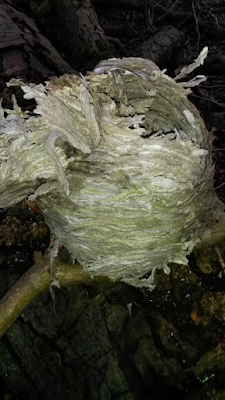 the way the wasps make the nest they've practically given us a whole ball of paper!!
They chew up wood pulp to break down the fibres and then build the most incredible house and inside you can see where the grubs live, what a fantastic construction.
This one was the size of a watermelon so it will provide vast amounts of tinder for use with a ferro rod once dried.
Posted by Buzzard at 14:28 No comments: 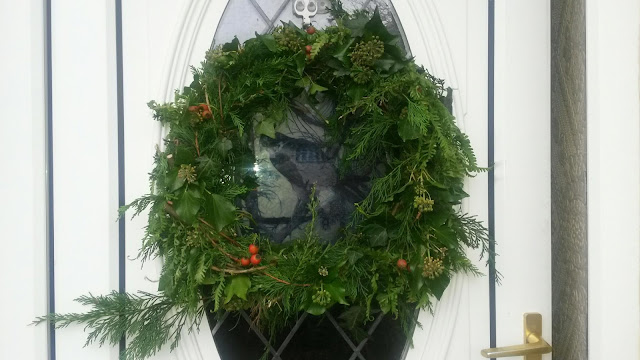 Using the spine of your knife as a ferro rod striker - Bad idea.

I'm sure we have all used the spine of our knives as a ferro rod striker but for a while it's been puzzling me why I have to re-square the spine every now and again and why the square edge doesn't last long after continual use, I put it down to steel wear, just like the edge of your knife needs to be re-sharpened then so would the spine, but recently I started thinking about this and it hit me.. The reason the spine wears and gets less effective over time is simply that we are damaging the temper of the blade each time we strike the ferro rod. Lets face it, a ferro rod burns at around 3000 degrees Celsius, although it only burns for a very short time that initial burst of heat is enough to damage that area of the knife, I've found that stainless gets brittle and chips and carbon gets soft and wears or rolls, 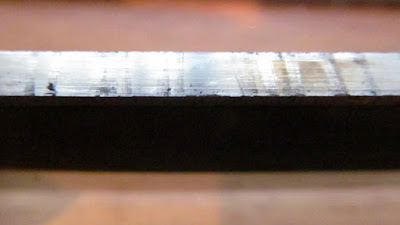 this is a carbon bladed knife , if you look closely at the spine edge you can see damage to the square edge, every time you strike the ferro rod, the heat damages the temper and causes the edge to get softer 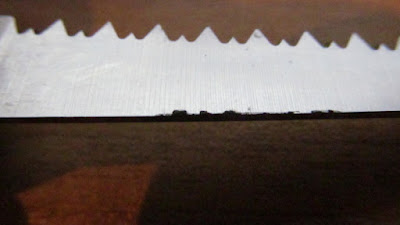 and a stainless blade which is much more noticeable, this is a victorinox farmer, you can see what fewer than a dozen strikes of a ferro rod has done to the spine of the saw blade. Being a thinner blade heat isn't dissipated as much and therefor the damage is more dramatic, but over time all blades will suffer.
Your knife is your most important piece of kit, treat it well, get a proper striker for your ferro rod and use your knife for what it was intended.
Posted by Buzzard at 05:59 1 comment:

Although said to be commonly found around our coasts, I have found it more commonly along the western Atlantic seaboard. It's a pretty wee plant with pink or sometimes white petals and succulent leaves and is a nice winter coastal edible, though can be found at most times of the year. It's got a sort of radishy mustard taste which is to be expected from the crucifers I suppose and is certainly much stronger in taste than the cultivated salad rocket, apparently the root is edible too though I'm reluctant to dig up a plant unnecessarily just to try it. 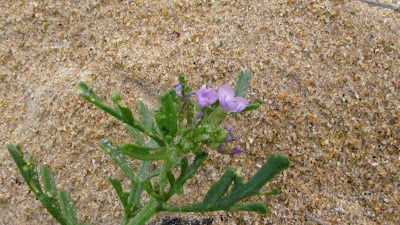 It has a medicinal property in that a poultice is supposed to help heal infected wounds and cuts.
The flowers are supposed to represent the colour of mermaids tears!﻿
Posted by Buzzard at 11:15 No comments:

I've had this beefy puukko for about 6 months now and already I can see a number of people online comparing it to the Mora Garberg with one guy on youtube actually calling it the Garberg Killer.. it seems like this epithet it catching on! 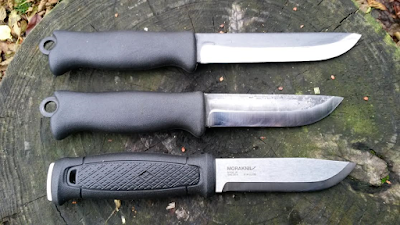 The knife comes in 2 sizes a 110 mm blade and a 140 mm blade, the smaller one is quite similar in size and design to the garberg as you can see in the picture above, the blade on the puukko is 4mm thick but has a typically high Finnish bevel with a secondary micro bevel which makes for a very resilient edge indeed, I find that the Jaakari puukko outperforms the Garberg on virtually every test I've done, and to those who think it necessary the blade is full tang carbon steel as opposed to the stainless of the Garberg.
But the best point of all, it you just buy the knife on it's own it's only a third of the price of the Mora, I can see why it's called the garberg killer!
Posted by Buzzard at 07:05 No comments:

OK, I said I wasn't going to buy one and in my defence I didn't nor would I have paid the full retail price for this knife. Quite a few retailers had this knife significantly reduced over black Friday and when I say reduced I mean less than half price!! Now make of that what you may but I don't ever recall a newly released mora knife being reduced to less than half price within a few months of it's release, I can only assume that sales where particularly bad and this was a way to get a few more knives in hand. 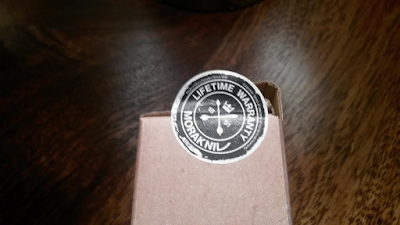 as for the knife when it arrived I was quite reassured to see the lifetime guarantee sticker on the box but that means nothing if the knife is going to spend it's entire life in a drawer. 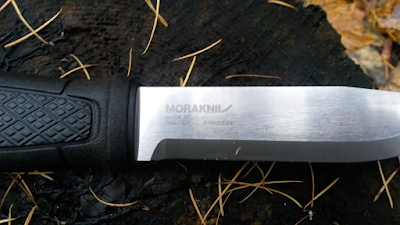 The knife feels nice in the hand, only nice, not wonderful or exceptional or magnificent, just...nice.
the blade is a lump of stainless with a sharp edge on  it, that's all I can say about it, it's nothing exceptional, it doesn't take my breath away or feel like "quality" when I hold it, actually it just feels like a beefy 510. When I compare it with other knives of a similar price like Enzo's for example or even the Real Steel Bushcraft knife at half the Mora's price then it fails considerably in comparison.
I never thought, and after holding and using one I feel even more vindicated in saying, that this is not a £100 knife, it's embarrassing to have it marketed as such and I have no doubt that's why it was reduced so heavily recently. 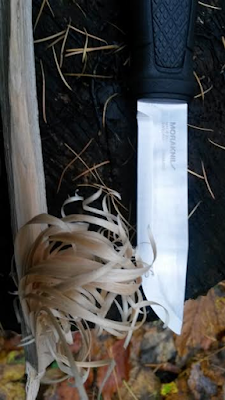 How does it perform? Well it cuts well enough though I find the grind a little obtuse and when prepping food like apples, carrots or potatoes it tends to split rather than cut. It makes feather sticks fairly well but again it's not the knife that does that it's the user!! I'll try it out for a while but I don't think this will ever be a favourite, I'll probably get fed up using it and resort back to my 510's or robusts. I'm so glad I never paid full price for this, at half price it's just about worth it, at full price I would have felt cheated.
Also I can't get my head round this "it has to be a fulltang knife thing", nobody has ever put together a cogent argument as to why a knife HAS to be full tang that has swayed me, after all a knife is, or should be, used for much more than just batoning, does a wood carving knife or a food prep knife have to be full tang? I think not.
Posted by Buzzard at 13:27 1 comment:

On one of our permissions there is a gorgeous little stream, it's actually little more than a creek and for most of it you can actually step across it, however at this time of year it gets a run of really decent brown trout 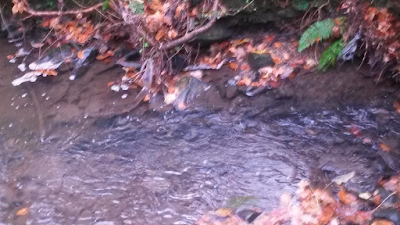 here's the creek (sorry bout the phone pic).. can you see anything hiding in the current?
lets take a closer look.. 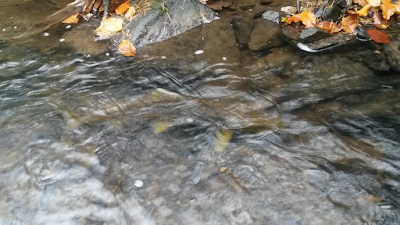 can you see it now?.. estimates put it at about 4lbs, it's a really good fish!
Posted by Buzzard at 13:23 No comments: