We were recently approached to review a couple of items from Spartatarp, they were a tarp and a hank of paracord. These items were sent to us so that we could perform an independent review with no bias.
I have use this tarp over the past month each weekend and this is how it performed. 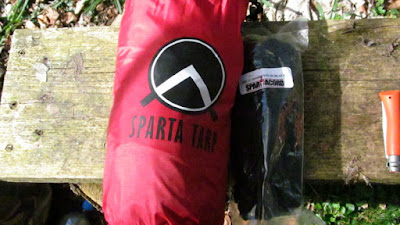 It's in a nice red carry bag with a cool logo, the tarp itself is black, and is roughly 10ft by 9ft and it also comes with some short but quite thick alloy pegs. It's got 19 attachment points, 16 around the edge and 3 along the ridge but the thing that makes it a little different from other tarps is that the corner attactments are regular webbing but all the other attachment points are heavy duty 15mm elastic webbing. Now this is a clever design as it adds in a touch of suspension when the weather is against you and the wind gets up. Also for the weight conscious amongst you it comes in at a mere 600g !! 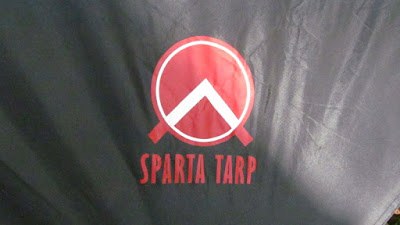 The logo is prominent and only on one corner and while this may discourage some people, I think it looks quite cool. 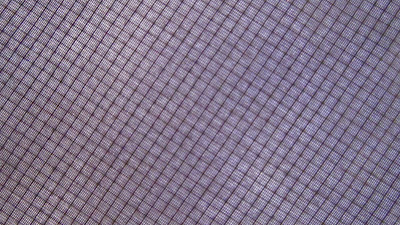 The fabric it's made of is lightweight ripstop nylon with a waterproof coating inside, it's very nice looking fabric having the same look as the carbon fiber scales you'd find on a top quality knife handle. If you know ripstop then you'll know this will be a tough and reliable material that should last. 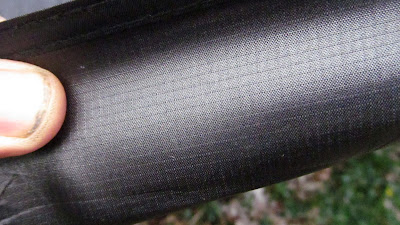 Here you can see the underside of the tarp, the crosshatched weave and the waterproof coating, it's looking very impressive so far. 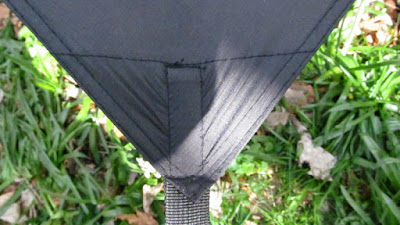 The webbing tabs are reinforced with a woven polypropylene layer taking the strain off the main tarp and distributing it evenly across the corner, but as you have elastic webbing tabs too, any extra tension put on the tarp through extreme weather conditions or even by tripping over the guy ropes should be easily absorbed resulting in fewer stresses on the fabric and attachment points. 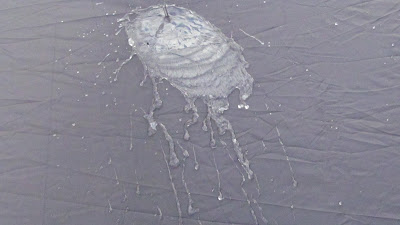 As my luck would have it, the 4 weekends I spent under the tarp have all been dry, so I couldn't vouch for it's waterproofness. This left me with a quandry as the whole premise of a tarp is too keep you dry, so not wanting to publish a review without this vital issue being broached I decided to do what any genuine bushman would do, I poured 2 gallons of water right onto the tarp!! This is considerably more than you would ever expect the tarp to deal with in any rainstorm you may have the misfortune to be out in, if it's going to leak then this is the time for it to do so, the water column pressure on the fabric must have been quite high at the time but I was confident that it would take the beating... 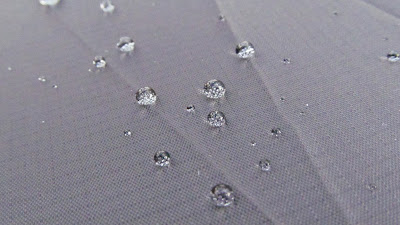 ..and it did, very well. The water bounced off the fabric easily and beaded beautifully as it wiggled and wound it's way down the fabric and onto the forest floor with not a single drop penetrating the material, very impressive and it certainly gave me the confidence to use this tarp during any torrential storm I may be out in. 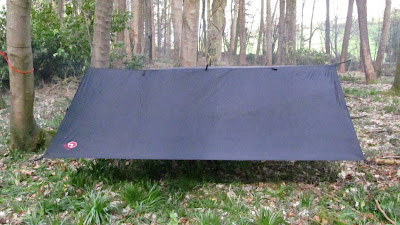 Above you can see it pegged out with just 4 pegs, one at each corner, a ridge line running under and fixed with two prussic knots to keep the tension.
All in all it makes for a superb piece of kit, one that I'd be happy to carry with me and rely on, especially due to it's lightweight and great fabric construction.

So if you are searching for a new tarp, contact Calum at SPARTA STORE and give serious consideration to this tarp, I don' think you'll be disappointed.
Posted by Buzzard at 02:26 No comments:

Along with the Sparta Tarp (see separate review) we were also sent a hank of paracord, so I thought I'd offer a quick review on it..
These days there's paracord and there's PARACORD, well this stuff is the latter.. 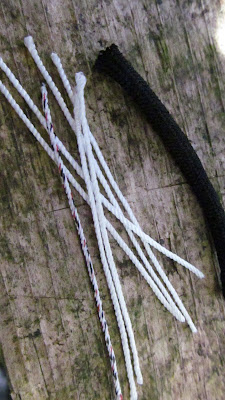 It's got the good seven strand inner matrix and the tightly woven outer shell.. The very middle strand is a mixed colour twisted cord, it's very nicely made and feels tight and firm, just what decent paracord should be.
I tried a few tests with it, first was to tie a section between 2 trees and stand on it to see if it broke it didn't, and if it can take my weight it's good stuff (remember knots regardless of how well they're tied can weaken the stated breaking strain of any cordage).
Second test was to tie 20 feet of it to a tree and pull like crazy to see how much it stretched, normally weakly made paracord has up to 20% stretch and you can see the woven shell start to separate when doing this..With this stuff I got and extra 18" stretch which works out at roughly 8% stretch with no sign of wear or weakness, all in all a very very good type of paracord
.
You can contact Calum at Sparta store if you're interested in this cracking cord.
Posted by Buzzard at 02:13 2 comments:

Not wanting to be swayed by my disappointment with the Hults HY20 axe, I went ahead and bought the Trekking axe, it's also known as the Hultafors Hatchet, and it's a handful of a hatchet. 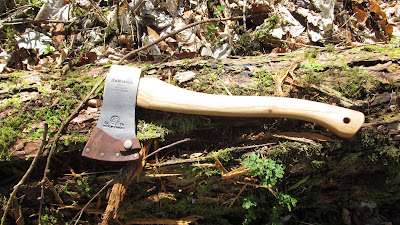 It's got a 17" helve made of hickory and an 800g or 1 3/4lb head and weighs in at about 2 1/2lbs altogether,
After the problems I had with the last axe, I intentionally bought this from Heinnies and specifically asked that they quality check the axe before it was sent and I have to admit, this one is a cracker! 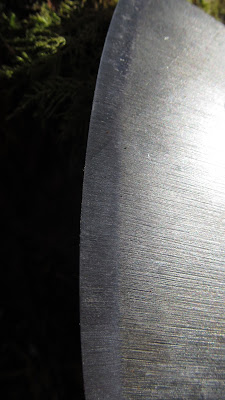 The edge wasn't bad, there was no burr, it was evenly ground and was sharp enough when I received it, the grind marks weren't as bad on this one as the last one. 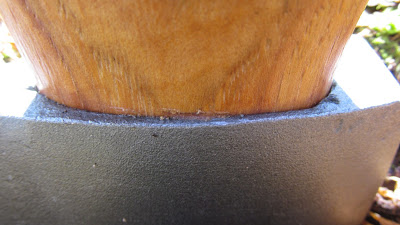 it seemed to be hung correctly, very little gap around the head and was properly centered on the helve, as a matter of fact it was fitted better than my Gransfors SFA. 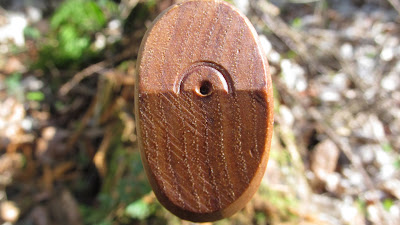 The grain in the helve was perfect and running vertically as you can see, there shouldn't be a problem with this one showing any signs of weakness. 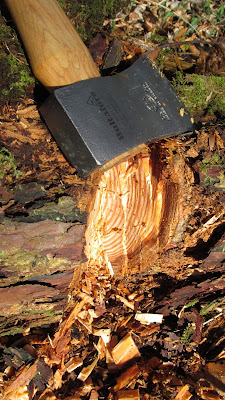 I tried it out without any refinement of the edge to see how it performed on a fallen scots pine and it bit in and chopped nicely, throwing great lumps of wood with every swing. 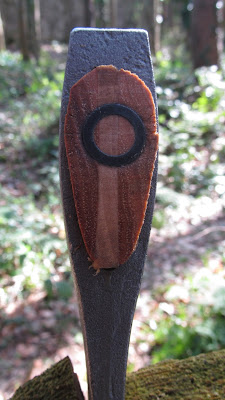 the head was fixed very well, nicely aligned and wedged and a decent job with the ring pin., 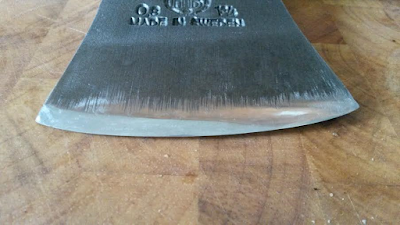 After a day of use the edge was good, still sharp but as usual I took it to the next level and sharpened and polished it so that it was hair popping sharp. It seems to be a relatively soft temper, easy to remove metal and nice to sharpen, the steel responded well to the stones I used and it turned out lovely, I'm very happy with this one.

I have seen it advertised as the Hultafors Hatchet but at 2 1/2lbs it's a mighty weight to swing for any length of time single handedly but it does seem to work well with two hands although an extra couple of inches on the helve would make it much easier, but then it wouldn't pack so well so it's horses for courses. I like it, smaller but heavier than the Gransfors SFA and certainly more packlable. It punches well above it's weight and takes a lovely edge if you put in the time..I'm sure it'd certainly build up your forearm if it's used regularly.. If Thor carried a hatchet instead of a hammer he would probably carry this one! Hence what I've nicknamed it.. the Thorax!. 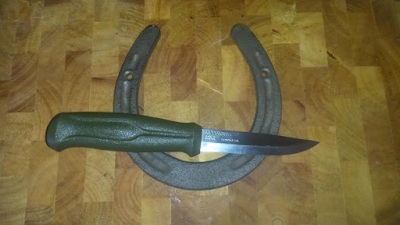 I hope you found this interesting and if you know of any stories, rhymes or lore that I've missed please drop me a line and let me know.﻿
Posted by Buzzard at 02:26 2 comments: