I've seen in Roger Phillips book that this particular plant only grows on the south coast of England ,it is supposedly rare to non existant further north,well as you can see nobody told the plant that Portmuck strand is too far north.. 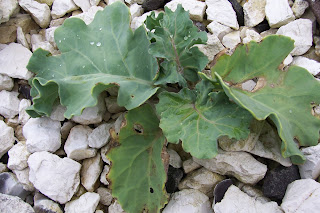 The plants we found we're small﻿ but we did find a few of them, but whether their diminuitive size was due to their latitiude or the time of year yet remains to be seen, we will investigate them again next year to see how they have fared. 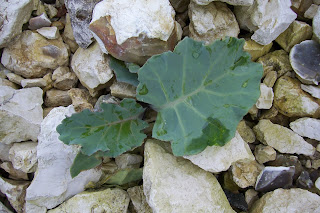 The seventeenth Century Herbalist Gerard says of this plant..
" Groweth naturally upon the bayche and brimmes of the sea where there is no earth to be seen but sand and rolling pebble"
It's not the leaves that are normally eaten but the young flower spikes and these can be a glorious purple colour at the right time of year, alas I think we are just too late for them this time,but roll on the Month of May next year we when our investigations shall continue.
Posted by Buzzard at 01:22