This is the second of the 2 plants I have been looking for and eventually found this year. It's relatively uncommon in Northern Ireland so it was good to eventually find it 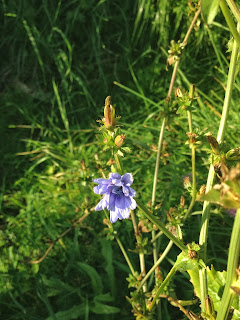 The leaves are edible but can be bitter, I nibbled on one and they are but I've had worse.
The most common thing chicory is used for is as a coffee substitute and I'm sure we're all familiar with that use, although I've read reports that over consumption can cause retinal damage, though I'm unsure as to how accurate this is.
The roots are edible raw or cooked and there is a history of it being used in europe where it's called endive.
Mythology about chicory states that when "taken" in a particular way it opens the doorways between earth and the spiritual planes, maybe best just to eat the stuff!