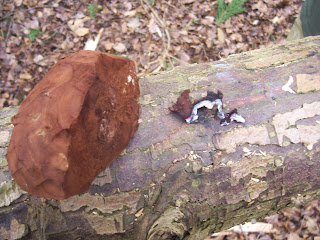 ﻿So we found some nice amadou and cut itup for a test. Davy stretched it out and slightly air dried it, nothing else was done to it, as a matter of fact to me it still felt a little damp.
We tried it with flint and steelbutit wouldn't take a spark, so we tried with a ferro rod and as you can see 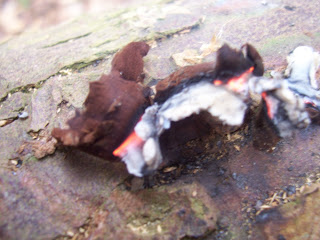 It took and smouldered rather well. The thing we found out was that the unprepped amadou﻿ itself didn't take the spark but when the sparks from the ferro rod landed on it and charred it or burnt it a little, then another spark landing on the charred portion was what caused the fungi to hold the spark, so that's the trick, this is probably the fungi that will take a spark when charred properly, and I'm sure it would work with a strike-a-light too.