I know most people know how to make this stuff but I'm still surprised by how often I see or hear someone ask for tips,it's the easiest thing in the world to make 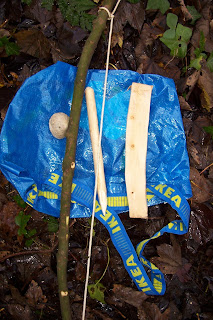 Two attempts and no joy, getting plenty of dark dust but no ignition point, the damp air,surroundings and the wind were all conspiring against me, but the set was now warm, any residual moisture had been driven from spindle and hearth and I knew I had to bow a little longer and faster in such conditions to get an ember 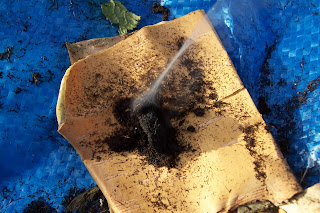 ﻿third attempt and I had an ember,but..when I tried to get it to flame I lost it,seemed just too damp, but never give up!! fourth attempt produced an ember that I got to flame

﻿An old tin with a small hole in the lid allowing the gases to escape and filled with old cotton cloth,here it's an old tea towel 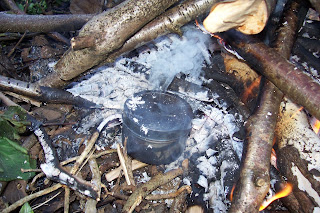 ﻿Tin placed in the fire and you can see the gases escaping, don't let these gases ignite!

﻿Once no more smoke is coming from the little hole, remove the tin and allow to cool, and here we can see the end result, this char cloth takes a spark easily and helps create fire the way the pioneers did! 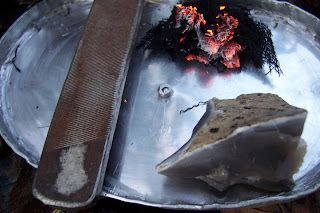 ﻿
A quick spark put to it with a flint and steel to prove it works well and we're all set to go
Posted by Buzzard at 12:26