One of my all time favourite shrubs (though I do have many) especially when it's fruit is ripe and ready to flavour my favourite liqueur, Sloe vodka..still the folklore is even better 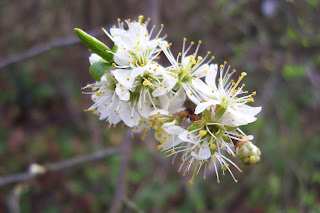 ﻿There is probably more lore about the blackthorn than any other tree in Celtic mythology. Blackthorn is associated with Witchcraft. In 1670, in Edinburgh, Major Thomas Weir was burned as a Witch along with his most powerful magical tool - a Blackthorn staff, carved with a Satyrs head, which was said to have fantastic powers - it was even able to fly through the air
Blackthorn in bloom is considered an emblem of life and death together as the flowers appear when the tree has no leaves, just black bark and thorns 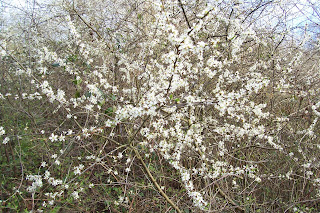 In Irish ﻿folklore it was believed that the "little people" lived in Blackthorn bushes and these were often referred to as Fairy thorns. These Fairy folk are said to guard Blackthorn trees and will not let you cut branches off it - if you do you will be cursed with bad luck, however if you walked past a blackthorn and a branch tapped you on the shoulder it was a sign that the little people had permitted you to cut a shillelagh for your own protection. It was bad luck to wear the flowers in your buttonhole. Another belief was that a Blackthorn wand with thorns fixed to the ends was harmful and actually if you get a black-thorn in the flesh it quite often turns septic incredibly quickly.In other folk tales, heroes were aided by the Blackthorn tree - if they threw a twig of Blackthorn after them, it would take root and form an impenetrable hedge, thwarting the pursuing of the giant known as Finn McCool, also in some versions it is the blackthorn hedge that causes the prince to lose his eyes when seeking his true love, the Sleeping Beauty.
Still, due to it's incredible magical powers a lot of us old Irish still consider it proper attire to carry a Blackthorn stick when walking.
Posted by Buzzard at 13:25