Fire by percussion is my favourite method of firelighting and I'm always on the look out for new stones that will work with my steel, obviously flint is the king here, but quartz and even basalt work well too. However just recently we found a very small deposit of Jasper. Now I've found this in Donegal before but never close to home, so we're well chuffed with this find. The stone is a silicone dioxide based stone along the lines of flint and quartz, it's often referred to as a chert, but it doesn't fracture just as well and tends to be different colours although mostly a reddish hue, it's opaque or very slightly translucent around the outside and produces sparks although not in the league of flint.This stuff is not great quality and it certainly isn't jewelry standard but we have made fire from it very easily and as such it's another string to our bow so to speak. 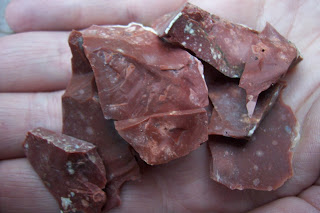 Also found an interesting quote about it...
"A mineral of the siliceous kind and of several varieties. It is less hard than flint or even common quartz, but gives fire with steel. It is entirely opake or sometimes feebly translucent at the edges.."
Source..Webster's 1828 American dictionary
Posted by Buzzard at 08:44