When out recently we came across quite a few of these plants, all called by different local names but wild carrot seems to cover them all. It's a pretty plant but somewhat similar to hemlock so be very careful if you try to identify any umbel 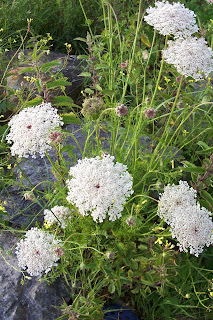 This one is easier to distinguish as it has a scarlet bl﻿ossom right in the middle of the umbel (although this is not always present!), Botanists don't know why this scarlet flower is present although some think it may be for insect attraction however it's certainly one of the prettier members of this family. 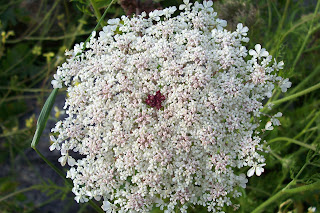 ﻿here is a closer view. I have read that this is the originator of the cultivated variety but further research seems to be that it is actually a subspecies of this plant that is the forefather of the "domestic" carrot. I do know that the root is supposed to smell like carrot so lets take a look and see... 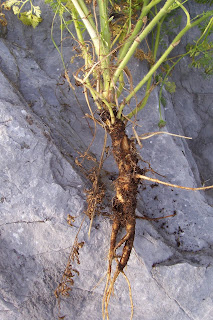 ﻿It's not overly carrot like, and I wanted to replant it without harming the plant so I snipped a little off the bottom of the root and it does smell exactly like domestic carrot, I was quite surprised! However the root is extremely woody and in no way edible (maybe when it's younger) so maybe the subspecies idea is correct..
Folklore -
The plant was often used in medicinal lore, being a diuretic and it was also supposed to help cystitis and prevent kidney stones. It has also been used in cases of diabetes..However ancient folklore said that to cure epilepsy you should eat the scarelt middle flower. This little flower was also used in ancient spells to increase the fertility of women and the potency and sexual arousal in men.
One myth says that this plant (also called Queen Anne's Lace) got it's name when one day the queen was making lace and pricked her finger causing a little drop of blood to fall in the center of the lace.
Posted by Buzzard at 03:49