I have always wanted to make one of these, but in Northern Ireland we rarely have the snow to be able to attempt it but recently we've had quite a good fall, so after duely being well inspired by Andy's snow caves over on Belfast Bushcraft Blog I decided it was high time to give this a go. First I piled the snow as high as I could, I was only using a small entrenching tool and anybody who says they can build one in 45 mins is lying through their teeth!! It took a good 2 hours to get a pile about 4 feet high and about 7 feet in diameter, this was to allow a wall thickness of about 12 inches and allow me room to sit in but not be big enough to stand up, this all aids in warmth allowing your body heat to warm up the still air inside and keep the chill off.. 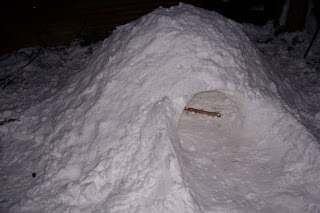 Once the pile was high enough I poked bamboo skewers through the wall so that when hollowing it out I could tell exactly how thick the walls were. I left the snow to set for about 4 hours , this is called sintering, and once set I started to ho﻿llow out the inside, this was relatively easy and I quite enjoyed this part. With the snow I dug out from the inside I used it to form protective wind walls outside the entrance to stop the wind from blowing inside from each side of the quinzhee. I dug out just enough to allow myself and the 2 dogs inside and no more and the entrance was big enough to just allow me to wiggle inside on my back. Once inside it actually felt a little claustrophobic and I don't normally feel this way, but I really think it was having to crawl in through such a small tunnel and door that was causing this so I widened it a little and it felt much better!! I would rather sacrifice some heat to allow a more mentally relaxed atmosphere inside. I was very surprised by the comfort it provided inside, there was no air movement at all and it felt very still and relaxing, it was also very silent which really surprised me, I could hardly hear any sound from outside at all and it is a completely different feeling from being inside a one man tent with only a fine nylon wall between you and the outside world. 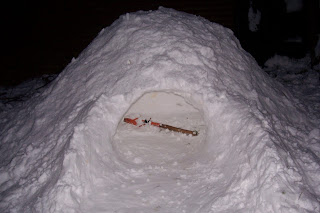 I  sent the 2 dogs in to get a depth of scale, unfortunately they wouldn't take any pics of me once I was inside!! 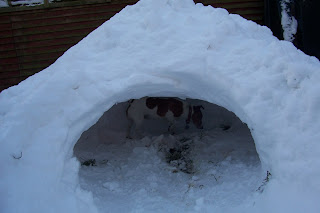 Here is Copper inside, Pebbles is inside too just round to the right behind the door..One strange thing happened the following day, after it had been built for about 36 hours the thing seemed to have shrunk!! I could no longer fit inside comfortably and it was quite a squeeze to get in, it had probably lost a good 8 inches in diameter, I don't know if this is a common thing or not or whether it was﻿ because the tempteature dropped significantly after I built it but if I ever have to build one of these things for real, I will make sure I build a little extra room in it, just to allow for shrinkage!
Posted by Buzzard at 12:36