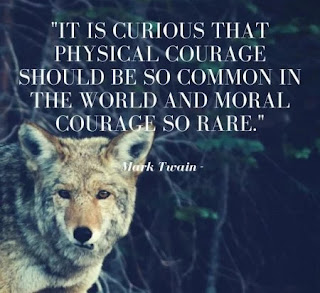 People are very quick to raise their fists in anger but not their hands in peace. I think Mark twain said it perfectly in the above quote. I can understand why people are afraid of bombs and bullets but can't understand why they're afraid of words, rather than face up and discuss things they often run and hide, I guess it's nothing more than moral cowardice.
Courage is being able to admit your weaknesses and ask for guidance, courage is being able to offer help humbly to those in need, your courage is your strength, both moral and physical but both should be practised equally. There's no shame in admitting you're wrong and there's no shame in accepting an apology but there is shame in silence.
Winston Churchill said 'courage is what it takes to stand up and speak but courage is also what it takes to sit down and listen.'
Seek nature's path, see her in all her glory and realise she is courageous in all ways and never silent, the plants and animals around us will show us true courage as they fight every day for survival. Be courageous, be the best you can but do it for yourself, follow your own path not that of the crowd.