It's one of those plants that everyone has heard of and everyone knows it's got a long history of very effective medicinal use but most people would walk past it without being able to recognise it if they saw it growing wild, which it often does. 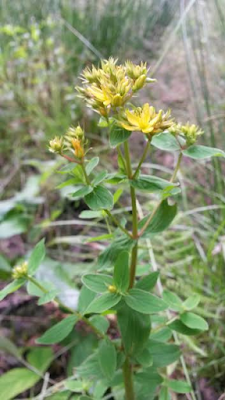 I've found it growing in a lot of places and it's one of those herbs that I often pick and keep dried should anyone ever need some.
It's quite easy to distinguish with it's woody base, bright yellow flowers and oval opposite leaves and if you look very closely little dots on the leaves.
It's medicinal uses include a cure for diahorrea, bladder complaints, nervous disorders and depression.
The fresh or an infusion of the dried plant can be used to treat infected wounds and ulcers, also swellings and bruising, however side effects have been noted with this herb including some as severe as anaphylaxis and foetal abortion so never use this plant unless you know what you are doing, and even then use in moderation.
Legends about this plant say that it can keep away the devil, evil spirits and apparitions, being named after St John the Baptist this holy plant was often thrust into the mouths of witches to make them confess.
Paracelsus said the plant should be picked early in the morning as the first rays of sun touched the petals, it was this plant that was most effective in creating the potion called the blood of Christ.