Probably the prettiest of all the gulls, and certainly one that is commonly seen when around the coast during the summer, they're less likely to be seen in autumn and winter as they spend their time further out at sea 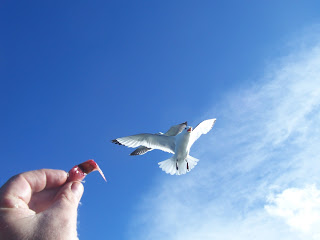 ﻿noisy and boisterous and quite quarrelsome they can easily be tempted close in with a bit of bait when they tend to fight and bother each other in a race to the prize! 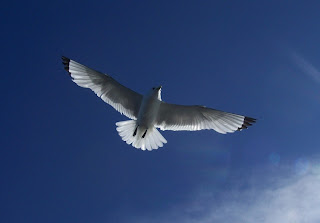 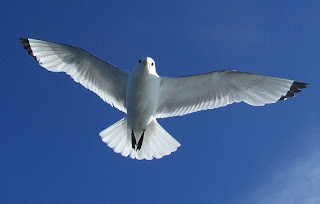 ﻿very easy to distinguish from other gulls due to it's size and almost feminine appearance, the beautiful pale grey and white body with the wink tips dipped in ink, makes a good companion when afloat and can become quite tame if you feed them, even being bold enough to take the food from your hands.

When I lived in Portavogie the local fishermen refused to ever kill a Kittiwake believing that they harboured the souls of sailors and fishermen who had died at sea, it was considered a compliment if a Kittiwake landed on the boat for a rest and feeding the birds was a way of ensuring a good catch and a safe return to the home port, who am I to question the lore of the ancients?
Posted by Buzzard at 12:20