The Legend of Cu Chulainn's Belt 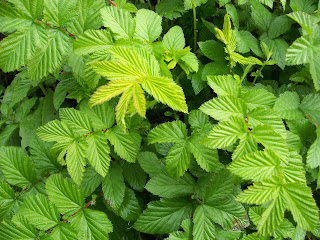 I'm sure you're all familiar with this plant..
What you may not know ﻿is that in Ulster it is referred to as CuChulainn's Belt (Crios Cu Chulainn).

This mighty hero is Ulster's greatest warrior, hailing from the Red Branch Knights he is famous for his battle with Queen Maeve of Connaught. When Cu Chulainn fought his battles having been taught the art of war by Scathach in Scotland, he often transformed into a hideous man mountain of deformed flesh weilding his blades and his Gae Bolg at anyone who came within his reach, friend and foe alike.
To calm him from these violent rages the only thing that worked was to have him bathed by 12 Ultonian maidens in a bath of meadowsweet, the scent of the meadowsweet and the caresses of the maidens calmed him and returned him to his usual form. He enjoyed this so much that after his first bathing he had the maidens weave him a belt from the plant that he wore to remind him of them.
It is said that after his death he awaits a calling and will return if Ulster ever has need of him again.
Posted by Buzzard at 04:21