The Flower Of Winters End

This little white flower is normally one of the first to appear after winter hence it's name, the Winters end flower, white flowers are my favourite. 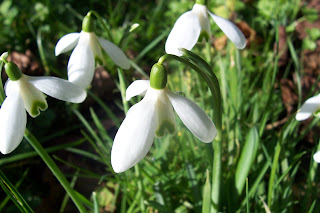 Folklore about this little flower tends to be quite contradictory, with it's presence often in churchyards and grave yards, some say it is earth bound spirits trying to leave their graves and gain access to heaven. Some say it's a flower of ill omen and should never be brought into the house.But I like to think of it as the flower of hope, ﻿according to legend snowdrops first appeared when Adam and Eve were driven out of the Garden of Eden to a land where it was winter. An angel consoled them by promising that, even here, spring would still follow winter. As a token he blew upon some falling snowflakes which, as soon as they touched the ground, were transformed into snowdrops. In this way hope was born. Ever since then, snowdrops have appeared during the bleakest winter weeks as a sign of the better times to come, and that certainly is how we like to view them.
Posted by Buzzard at 03:47