A lot of people are familiar with the 'regular' plantains we often find, that is ribwort plantain and broadleaf plantain, but a lot of people aren't so familiar with the other species of plantain that can be found in the UK, and this is one of them. Stagshorn or bucks-horn plantain, so called because its leaves look a little like deer antlers, tends to be a coastal plant though it can grow inland when roads or path ways are regularly salted. 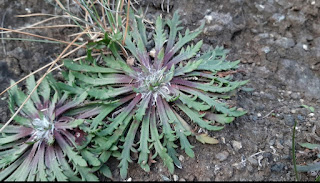 Though not as medicinal as the aforementioned plantains, this one is slightly more palatable. Books say it tastes like parsley which I dont find at all,  I find it slightly bitter and salty though not as bitter as ribwort, it has a succulent texture and isn't the worst wild edible I've tried and I suppose would be fine mixed with other salad plants rather than just on its own. It has been used as a salad leaf and there are now commercially grown varieties used for salads. I haven't tried any of these commercial varieties but there must be some demand for them if they are now farmed for food.