A very special thanks to Geoff for his contribution, all copyright for this article lies with him.

Thanks to Buzzard Bushcraft for posting this, hope you like it.

Deer Stalking
Getting food from the wild has always been part of bushcraft but in the UK is probably one of the most problematic areas of the pastime due to laws and legislation related to the use of firearms, bows and traps.
Deer, their meat, hide, tendons, bones, antlers, hooves, organs and teeth would all have been used by our primitive ancestors and nowadays the only common legal way of ‘taking’ a deer in the UK is by stalking and shooting with an appropriate firearm. Other than for their desirability as food deer also need to be shot to manage their population, in the UK there are six wild species of deer, bearing in mind that only two of those species are native and that they have no natural predators their population is large and increasing. Deer can damage agriculture, forestry, timber and conservation areas.
For all my deer stalking I use the rifle pictured here; a Tikka T3 chambered in .243 winchester fitted with a T4 silencer, a leopould scope and a bipod.
﻿

Today there are two main target species, Chinese water deer (CWD) and reeves muntjac. CWD were introduced to the UK at the end of the 19thCentury, first appearing at the London Zoo and Woburn abbey, after several escapes and releases they became established in Bedfordshire and have now spread. They are unique among the wild deer of the UK as they have no antlers, instead the bucks sport a set of large curving ‘tusks’. These are also present in the does but are much smaller and do not generally protrude below the lip. This species can be taken between the 1stof November and the 31st of March 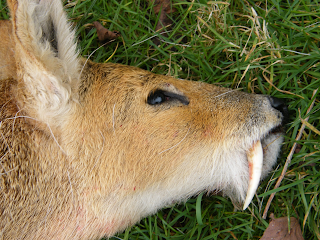 Muntjac are another introduction to the UK and they can be a serious nuisance in woodlands as they are partial to feeding from regenerating coppice and wild flowers such a bluebells. They can be shot all year round as they have no established breeding season. Like the CWD the bucks have tusks, but they are smaller than those of the CWD, they also have short backwards pointing antlers and some rather unique facial features; 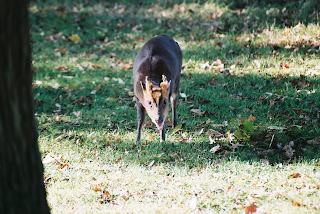 A young muntjac buck showing the long ‘pedicles’ (the structures on the skull where the antlers grow) swept back antlers, distinctive skull ridges and corresponding black markings, you can also see clearly just in front of the eyes the massive sub orbital scent glands.
Once all the preparations are made you can start stalking, make sure you have the wind in your face so your scent is not carried to the animals ahead of you and use your binoculars regularly, you would be surprised how often you can’t see a thing but once you look through your binoculars you can see the tell-tale signs of a deer’s presence such as the deer in this picture which you might never spot without binoculars; 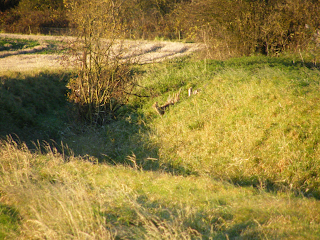 Once you have spotted a deer that you are going to shoot you need to ensure that you can get within range and and that it is safe to take a shot; 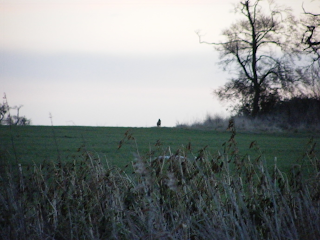 For example it would not be safe to shoot at this deer, you can’t see what’s behind it and a bullet will pass through the animal if you hit it and if you don’t a .243 rifle like the one I use will send a bullet about seven miles if fired in the air at a 45 degree angle. NEVER TAKE A SHOT LIKE THIS. 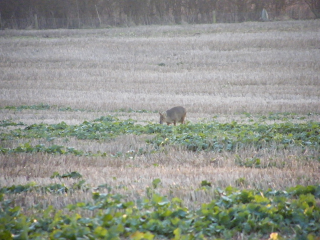 This is much better, there is a field rising behind the target animal which will stop a bullet making this a safe shot.
Aiming for a chest shot to destroy the heart and lungs, once you have fired and hit the animal it may run for a while before dropping to the ground if you placed the shot correctly. Once you have approached the animal and confirmed that it is dead you now need to carry out the gralloch, this is the process of removing the animals digestive tract to avoid any contamination of the meat.
More to follow on how to carry out the gralloch, skin a deer, prepare a flint scraper for fleshing hides and working with and curing deer skins.
Check out my blog at www.bushcrafteducation.blogspot.com