I don't often put reviews on this site as there are plenty on you tube where guys spend 20 minutes﻿ putting the knife in and out of it's sheath and turning it over and round and in and out in front of the camera, not so much a review as a show and tell..A review is only a review if you use the knife for it's inended purpose!! 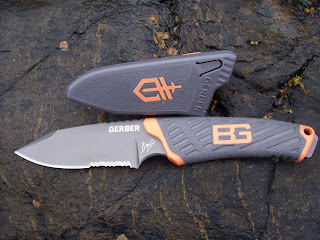 ﻿and here it is in all it's Toy Story glory with the dreaded serrations that all outdoorsmen detest. Anyway it's quite easy on the eye, nice and orange and very sheeple friendly..
As for comfort, well it's gorgeous! Really ergonomic and comfortable for occasional use, definitely a thumbs up. 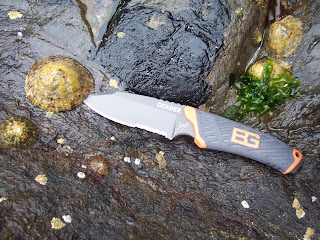 First seashore test was prying a limpet off the rocks, I really twisted the knife not sparing the edge against the rock or the limpet shell and I fully expected a chip or some rolling... 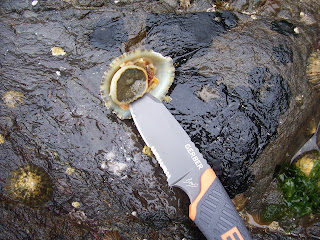 ﻿Limpet successfully prised off the rocks and next test was to gut it out of the shell for wrasse bait, very easily done, and another thumbs up! 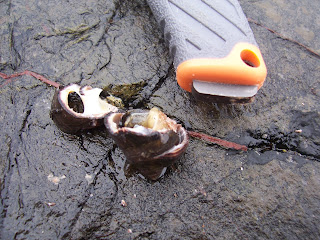 ﻿Next test was to use the extended tang for some bashing,here to crush a willick shell, again no problem at all 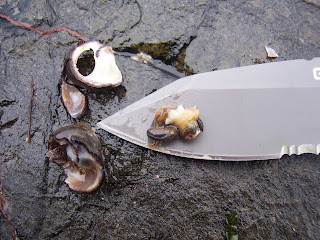 ﻿easily done and I ate this one! Quite tasty..also look closely to see the blade edge where I prised the limpet off, no rolling or chipping at all, and that was against solid rock, well done Gerber!! Good Heat Treat on this blade! 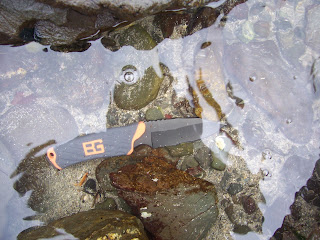 ﻿lastly was the rust resistance test, so I dunked it completely in salt water then put it straight in it's sheath without drying the blade at all, and 24 hours later... 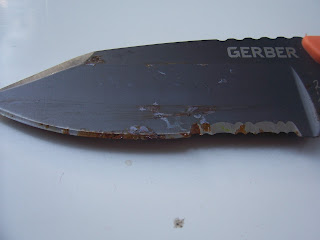 ﻿well the edge is rusty as you would expect but the coating on the blade has worked well, the edge rust is superfiicial and cleaned off easily with a loaded strop..

To finalise, it's a superb little knife that punches way above it's weight, and I would be happy to turn to this in a survival situation, if only Gerber would get rid of the serrations and release a Plain edge version the way they did with the BG Ultimate knife, then we could be talking about the best little production compact knife out there..Top marks Gerber!!
Posted by Buzzard at 11:10