I've caught many rainbows in my time but last weekend I caught a rare genetic mutation of a rainbow trout, a Blue trout. Its said that for every 3 million trout eggs that hatch only 30 of them will be blues. The photos don't do it justice but it had the most vivid Blue back I have even seen and it's sides where the silveriest silver I've ever seen ! There was virtually no pink on it at all. 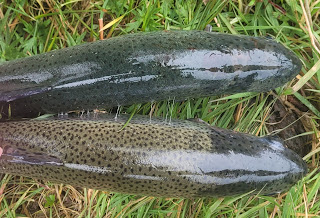 Again it's hard to make out the colouration but if you zoom in around the eyes and head the blue is very noticible. This fish fought better than any rainbow I've caught before and was an aerial ballerina, incredibly impressed with its colouration and fighting capabilities, I hope I am lucky enough to catch another !