I thought I'd left the whole custom knife thing behind!
My custom collection at one point was worth many thousands of pounds and I have had customs from some of the best makers in the UK, Europe, South Africa the USA to name a few, they have all given pleasure, but a desire to cherish rather than use is what made me realise that a good knife is one you've used hard, put through the paces, has proven itself over time and task and that you can rely on, not one you caress then put back in the drawer.
When I saw this knife advertised it spoke to me and I just had to have it. It's a woody clone but better! I've owned a real Alan Wood Woodlore in the past but there were a few niggly things that put me off it, the slightly too small handle and the slightly too large ricasso being just a couple.
So when I saw pictures of this knife I examined them over and over and over before biting the bullet and going for it, by the way this knife comes all the way from Romania.

This knife is called the Woodspirit, It's O1 steel, a 105mm blade with a 100mm cutting edge, 3mm thick with an RC of 61/62, handle is micarta 120mm long with brass fittings (a good size handle for my hands, a minimal ricasso, a decent bevel height and great edge geometry, perfect!) 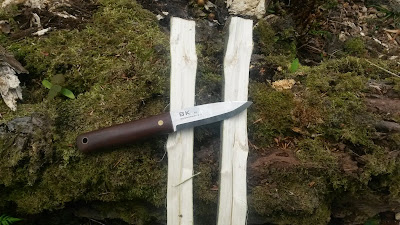 Admittedly when I first received the knife I found the handle a little too wide and uncomfortable as the scales were a little thick so I did have to take it down and profile it slightly to make it more comfortable for my use, but it didn't take much work and is all the better for it.
Once I was happy with the handle profile I took it into the workshop and put it through a couple of tests that most Bushcrafters would baulk at and probably not understand why I was doing them (but genuine knife people would understand) but I wanted to test the temper and steel resilience and it past with flying colours, impressive...
It seems that most bushcrafters expect to see a knife do the same usual tasks so not wanting to disappoint here they are...
The maker recommended that you didn't baton it through knotty wood, so the first thing I did was baton it through knotty wood..
No issues, no edge chipping or rolling and all seemed good. 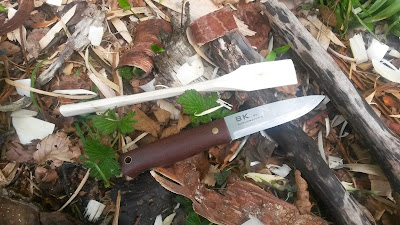 . I like to carve a spatuloon with a new knife and if I can do that comfortably then I know the knife will be a decent user. The knife is a little heavier in the hand than I'm used to (Y'all know I normally use Mora's these days) due to the micarta scales, but it didn't take long to adapt 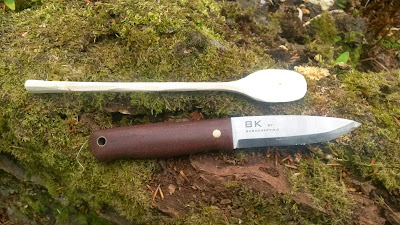 15 minutes later and the spatuloon was ready and allowed me to devour my boil in the bag sweet and sour!! The edge still felt good and was still shaving sharp, still no damage, not that I would be expecting any while undertaking simple carving strokes. 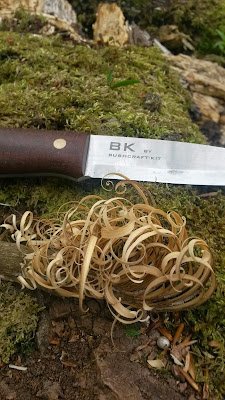 By the way I didn't touch the blade up at all through all the tests today to see just how good the edge holding was.
Next I put it to use feathering sticks, I wanted to get them fine enough so that they can be lit with a ferro rod, a lot of knives can feather sticks but not as finely as they need to be (or maybe that's more to do with the users knife skill?) 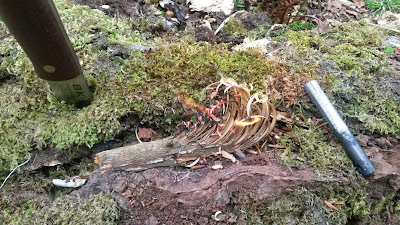 Again there was no issue at all, the feathers were fine and well curled (using dead standing dry laurel branches) and lit easily with the ferro rod. 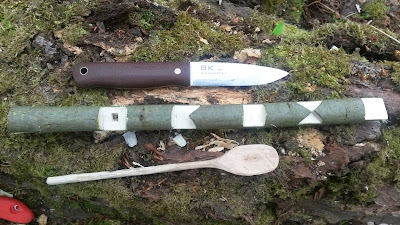 Next test was a few cuts that would be used on a regular basis in the woods ( based on Mors Try stick idea) cross hatches, pot hangers, square notch hole, figure four, etc all easily achieved and simply done using all parts of the edge - straight, belly and point. Tasks like this often require a good point on a bushcraft knife and how many times have we seen a brilliant knife otherwise let down from the lack of a decent point ( fallkniven F1 for example), but no worries here at all, it performed incredibly well and every cut and notch was smooth and easy with the knife.
After about 4 hours using the knife on various tasks I had no hot spots or hand ache, different grips were comfortable due to the slightly larger handle and tip work, choking up, reverse and chest lever cuts were all a breeze. 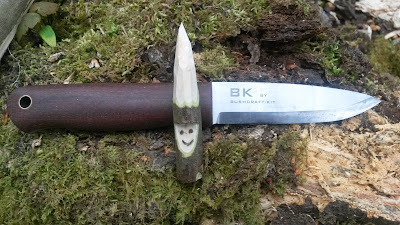 All in all the knife performed superbly, it easily lived up to my expectations and even went beyond. It was still very sharp after a full day in the woods and when I got home 10 minutes on the loaded strop had it back to sticky sharp, I could shave the hairs off a hair with this knife!
Although I doubt I will ever get the custom knife bug again I don't really need to, I think I've found the perfect bushcraft knife for me, it ticks every box I need it to and the price was very reasonable, Bogdan was a pleasure to deal with and I even got a bag of Skittles in with the knife when it arrived, that certainly made me smile and went down well!!
I have been waiting for the perfect knife for years and even when I commissioned custom knives in the past there was always something that just didn't click for me, the maker may have made the knife close to my design but it was never close enough, admittedly I'm a real pain to impress and I can find fault easily, but not with this one, it does it all. I sit at night carressing it and admiring it and can't wait to get out again to put it to more use.


To set the record straight, I bought this knife with my own money and I have no connection whatsoever with Bushcraft-kit.com other than being a satisfied customer.﻿


I will update this post over the coming months as I continue to use the knife and see how it peforms with regular work out in the wilds.
In the mean time if you want to get a better look at or more information on the Woodspirit bushcraft knife you can contact Bogdan HERE .
Posted by Buzzard at 11:08