One of those nice and nasty little sea bushes we find all around the coasts these days, it's got wonderful little berries but they're a nightmare to get at leaving behind scratched and bleeding arms. 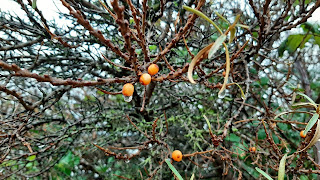 Normally you can find lots of these berries, often called sea berries, on these bushes but the ones I came across where rather sparse, none the less it always worth a nibble for the really sour astringent taste you get from them which I really like , as long ad you can get past the initial plasticy taste!
They have been used in the past to feed to horses, been used as a herbal medicine and often used in proprietary brands of cosmetics. They are also often found when most other berries have long gone. 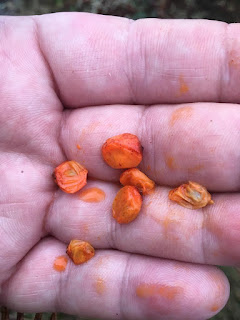 Messy when picked you often have to lick the juice off your hands but if gathered in quantities can be made into pies , jams and juice drinks. They also contain trace amounts of vitamin B12 which is rarely found in plants.